The title sounds like an action movie but we are looking at some lighting theory of reflection, the angle of incidence and interaction of light with different surfaces. Plus the comforting constancy of physics and being able to predict what happens to a stage lighting beam once you’ve let it fly.

Last week, a Project Manager sent me an email asking for my thoughts on forthcoming plans to use white PVC covered flats to back an award show, rather than using their usual finish material of felt. The question was specifically asking about successfully uplighting the shiny PVC from the floor using LED battens to create a changing coloured background. A pretty standard technique for this kind of show, making a pleasing backing for things to happen in front of. 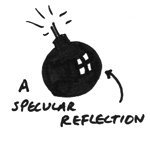 The set designers of today, whether creating environments for the TV studio, award shows or exhibition stands, have access to a wide range of materials. As well as traditional wood, paint and cloth finishes, they love to use polymers and glass. Perspex plinths, PVC wall coverings and glass table tops all have one thing in common. They give the lighting designer a headache.

Let’s take a look at the basic physics behind the problem.

What happens when you light a diffusing material like felt?

A felt covered flat or a Cyclorama has a diffusing surface that scatters light in many directions because at a micro level it’s, well, bumpy. A light source skimming across the surface is reflected back in many directions, including “out front” to the viewer. In fact, the useful viewing angle of reflection for a diffuse material is pretty wide meaning the effect works for the audience, wherever they are. The light reflects off the side of the bumps and out to the eye. Not having a really obvious nap or grain (like velour or suede) such a diffuse surface is pretty forgiving in terms of both lighting and viewing angles. It has a similar look from everywhere.

The light that reflects from a surface in this way is called, surprise surprise, Diffuse Reflection and is instrumental in the perception of reflected colour.

Because light spends some of it’s time pinging around on and shooting off at different angles , the lit surface also appears relatively even, with quite a lot of the original light doing it’s thing for everyone. Hooray for felt and other fluffy surfaces.

By contrast, high gloss surfaces such as shiny PVC based fabrics, are very flat at a micro level. Less bumps equals less diffusion . Shiny surfaces seem like they should reflect light well, they do indeed reflect it well. So well in fact, that any poor photon unfortunate to hit this material is instantly twanged off again in a reasonably straight line based on it’s originating source. This kind of reflection, the window shape reflected in the cauldron of Meg and Mog or a cartoon bomb, is specular reflection.

Surfaces have an element of both diffuse colour and specularity about them, including our white PVC.

So how do we predict the actual reflective behaviour of shiny things, including what the specularity will look like and where the dreaded, ghost like reflections will appear.

Bring on the angle of incidence.

The Angle Of Incidence and Light Reflection

In lighting, the angle of incidence (x in the image) is measured between the angle a light source strikes a surface and 90 degree vector to that surface (called the surface Normal, if you are into 3D CGI graphics you’ll know that). The geometry tells us that using a theoretical perfect surface, the angle of reflection opposes the angle of incidence. A lighting angle of 30 degrees will bounce back of at 30 degrees, the other side of the surface normal. This knowledge can also be used to calculate the set up of mirror effects, including Pepper’s Ghost.

This geometry is actually what makes a shiny surface less diffusing than a bumpy one. The surface normals of material like felt are actually all over the place, even though the flat is.. well, flat.

Back to Uplighting PVC

OK, so we know why skimming light across a diffuse surface works for us and what happens to the reflected light because of the relationship between the angle of incidence and the surface normals.

Lighting a shiny surface from a “straight on” angle, the small source is reflected in high def back in a similar direction toward the viewer, meaning they can see a reflected image comprising of every light source in the entire rig. Frankly, a bit of a visual mess. While the area of the source reflected is extremely bright, the rest of the flat doesn’t diffuse enough to create that pleasing coloured background we are after. Using RGB colour mixing LED fixtures, the individual LED light sources are not given a chance to mix on the surface as they rely on diffuse reflection for this to happen successfully.

Uplighting and skimming the light at a shallow angle across the surface, the viewer “out front” doesn’t get to see the source reflected because of the angle they are viewing from – not the opposing to the angle to incidence. Well, not unless they are clinging to the ceiling , the place which ends up being the brightest part of any low room due to all the lighting flying up there and diffusing it’s little butt off.

Lighting a shiny surface in this way, a large proportion of the light is wasted on things other than the viewer. So all in all, both physics and experience tells us that uplighting PVC flats with RGB colour mixing LED fixtures doesn’t work as we might hope.

Another dimension is added when dealing with surfaces that diffuse qualities that vary in different directions, such as brushed aluminium. The stripey bumpiness diffuses light and colour well in one direction while light from another angle of incidence is reflected in a specular way.

This is called Anisotropic Specular Reflection and is what gives these brushed surfaces their characteristic look.

Other shiny materials and the reflection of light

Other materials popular in the conference and exhibition industry may not all be as shiny as our PVC flats, but can exhibit reflective behaviour that leads to questions such as “Why is that graphic brighter than that one? “ or “What can you do with the lighting so that we don’t get that bright spot?”

Foamex boards, vinyl graphics and even polystyrene lettering all have their own level of specular reflection, though they appear reasonably matt. The result can appear to be a discrepancy in intensity or a particular highlight, which of course alters depending on where you look from.

Perspex lecterns and glass coffee table are capable of pinging your well aimed front light all over the backing, screens and even back into the camera lens. Ranks of chrome and glass awards trophies cause havoc by muck spreading light in all kinds of unwanted places.

What can we do?

Understanding the different behaviours of specular and diffuse reflection, the angle of incidence and how colour mixing fixtures create their light on the surface, we are armed to make design choices about lighting positioning and angles. We might even be able to make helpful suggestions about set materials while in discussion with the production designer and the rest of the creative team.

But the chance to take preemptive action, like advising against the merit of white PVC flats for LED uplighting, might not always present itself. The important thing to remember is how light behaves once we release it and that we work with a medium that, unlike smoke, is basically predictable.

As predictable as the likelihood that, when those truck doors open on another day, white PVC flats will be glinting back at you.