In this guide to “the dark side”, On Stage Lighting looks at light’s oppo – shadow. Understanding shadow, the lighting designer can control it, avoiding unwanted shadows while creating others for effect. 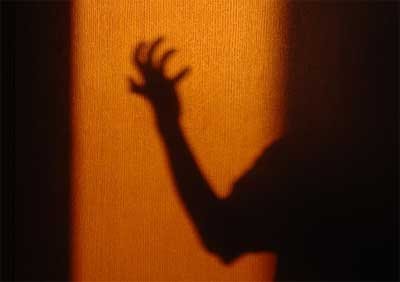 A troublesome Director may have heard me say “Sorry, I can’t make light go round corners. And I can’t make it stop in mid air!”

It’s simple. Light travels in straight lines until it hits something, then it does something else simple. Like bounce off in another straight line. I like this kind of predictability in an otherwise hap-hazard life. Shadow, being an absence of light created by an object (we’ll call it “the subject”) blocking those straight lines, are equally predictable. We can plan shadows using simple technical drawings and control them just as easily as light.

The Basics of Shadows

Using a lighting plan and elevation/section, we can work out how shadows will behave just as easily as our light sources. The image shows a section, with 2 light sources and some surfaces that our shadows will fall on (hope you enjoy the Biro sketches – there’s a time and place to break out the CAD and this isn’t it). Again, it’s just a matter of straight lines from light source, through subject creating an absence of light on the background surface. 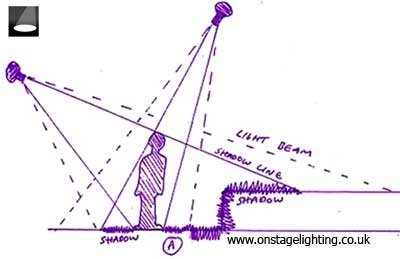 If you have read Focus Stage Lighting… you will have some understanding of how a lighting designer can use shadows to judge the effect of a light at stage level. Seeing your own shadow standing “within” the pool of light tells you where you are lit and not, when you move out of the light and whether two pools of light are “joined” together successfully. As lighting the human form is a pretty big part of the job, reading a human shadow is ideal.

The shadow can tell us other things: 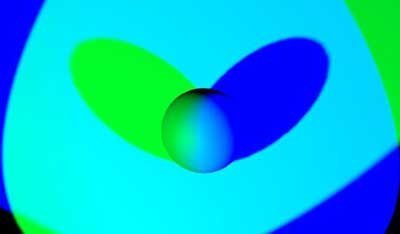 Often, Directors don’t like the thought of shadows – “ I want good lighting and definitely don’t want any shadows!”. What they mean is “I want my show lit well, so that no one is saying their lines in the dark.”. That’s understandable but we can’t have light without shadow.

There are times when you want to use shadow for a specific lighting effect. When planning our effect, we can use drawings and the “straight line theory” to work out where our shadows will fall and how big they are.

Some shadows are just not wanted. Shadows on a musicians score make it difficult to read the dots, shadows on a painted backcloth that depicts a landscape can ruin the illusion of perspective. Understanding the angle of a rig and using those straight lines, we can forsee any “shadows of doom” and work out how to avoid them. In the case of a backcloth, the answer is usually to light the cloth well enough from close up and overhead, washing out any stray shadows from frontlight further down stage. Putting some distance between the rear of the performance area and a cyc, while front lighting from a steeper angle, also prevents a shadow on your “sky”. 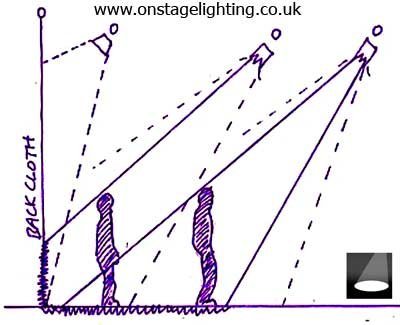 The harsh or diffuse nature of a shadow depend on it’s light source. Light from a tiny point source (such as a lamp filament) travel from one place as very structured, straight lines that create hard edged shadows. Stick a bit of frost into a lantern and you have a more diffused, area source of light, creating lots of individual shadows near each other. Really soft edged shadows are favourites of photographers who use a “softbox” or a TV style light with Tough Spun diffuser over the front. The softest of all shadows come from larger, area light sources – the largest on being a daylight sky. (If you were wondering, the sun is effectively a point source from earth even though it’s a big area – such a long way away that the light beams are fairly parallel when they get here!)

To rear project a shadow play onto a surface, you might want a wide “acting area” of light from a single source (only one shadow per subject). We know that if you put the source low down / closer, it will make the subjects loom large on a big surface – it’s predictable using our section drawing. Higher up and further away, the shadow players get shorter. We also know that if we want a hard edged shadow, we need a small point source of light. Shadow puppetteers use this to alter the size of their projected images, actors can do the same.

The image shows a backlit shadow scene projected onto a cyc with the light source in different positions and the resulting shadow heights. Moving the actor in relation to the the source can have a similar effect. 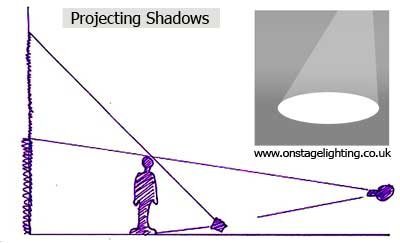 The traditional theatre method to do a projected shadow scene is to take the lens out of a large fresnel, so that there is nothing between the filament and the subject. Depending on the reflector type, it’s worth experimenting with or without reflector. Pushing the lamp tray as far forward as it will go, gives us the largest possible beam width for our shadow acting area. As a safety measure, it’s worth also deciding how you are going to protect everyone should the lamp unexpectedly explode. A bit of mesh in the colour frame or whatever.

Have you hugged your shadow today?

Far from being the devil in lighting, shadows can be a lighting designers friend, helping you to create great effects and “read” the interaction between your lighting and the world.

The fact that Messrs. Light & Shadow are so predictable makes controlling them incredibly easy. You couldn’t always say the same about Directors 😉