On Stage Lighting has always liked the ChamSys MagicQ and MagicQ PC, the free PC lighting control software, is the cheapest way to get your hands on a professional console. What makes MagicQ PC so great and why is it worth learning? 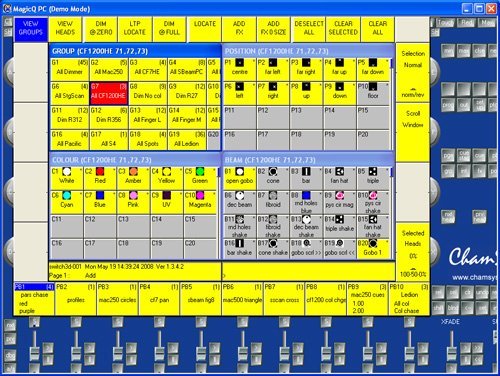 This month UK lighting control firm Cham Sys announced an affiliation with PRG Group to distribute the new MagicQ Pro series of lighting consoles in the US, Canada and Japan. This distribution partnership should mean that the MagicQ will become used more widely . The MagicQ Pro range was shown at PLASA 2007 and is aimed at the top end, professional users with complex stage lighting systems. The other MagicQ desks are no less “Pro” though.

Many features are common to all MagicQ control products, including the free MagicQ PC software. And, with the aid of a laptop and cheap DMX USB dongle, you can actually use MagicQ PC to run your shows.

Why is the MagicQ PC software free?

When MagicQ PC hit the scene, it was one of the first free PC versions of a professional lighting controller that wasn’t just a simulator and didn’t require expensive hardware to output DMX. ChamSys obviously decided that, in order to break into market dominated by a few well established players, they had to get their system used by as many people as possible. So, with 50 odd Euros of Enttec Open DMX USB dongle, you can download the free software and get cracking. Now MagicQ supports a number of third party PC DMX interfaces and ChamSys also produce their own hardware for outputting both DMX and Ethernet protocols. More about that later.

Looking for free lighting control software, you will find plenty of lighting professionals singing the praises of MagicQ PC. This is partly due it’s the range of lighting control features, but also comes down to familiarity. The workflow and interface of the MagicQ ranges are closely matched to other professional lighting consoles that we all know and love. Any operator who has a knowledge of popular lighting consoles such as the Flying Pig Systems Hog II or the Avolites range, can start programming, even without the manual or the on board help screens.

Other PC lighting control software is often less like a real lighting desk (why would it need to be?). The benefit of learning to use PC software like MagicQ PC is that becoming familiar with a console workflow is improving programming skills for real world situations.

What are the best features of MagicQ PC?

As well as dimmer and moving light control, the MagicQ also has features that are now the norm in good lighting consoles. LED array programming (media engine), Media Server integration and networking capabilities are a must have a professional lighting desk. A decent shape generator and Programmer based recording (the entire output of the console is not recorded – just the values set by the operator) are par for the course.

Another widely adopted feature includes spreadsheet manipulation and importing of data such as patch sheets and fixture information. A fixture personality editor gives you the option to tweak existing fixture files or create your own.

Graphical rig layouts and gobo/media icons are great for find the stuff you need quickly. All the major 3rd party visualisers are supported for pre-programming of shows.

A big selling point of the MagicQ system is flexibility. Busking shows, creating theatre stacks or triggering media events are all available in a user friendly format.

Some of best features on the MagicQ are found in the details of advanced use. Just some of these are:

What operating systems can MagicQ PC run on?

There are versions of MagicQ PC to suit most users operating systems such as Windows, Linux and MAC (Intel and PPC).

How do I get DMX out of the MagicQ PC software?

MagicQ PC can now be used with a variety of 3rd Party devices that output DMX. If you want to buy a cheap USB to DMX dongle that works well, I recommend the Enttec USB DMX Pro. Although the original Open USB DMX dongle works with MagicQ PC, some users have DMX signal problems. This results in twitching of moving lights and a DMX tester reveals framing issues – these can be rectified by cutting down the number of channels that the MagicQ PC outputs. The DMX Pro is based on different hardware and doesn’t suffer from this problem. For a cheap USB to DMX dongle, you can can’t really go wrong with the Pro, which can also be used as a DMX input device for many visualisers and other applications.

The downside to this lovely free stage lighting controller is, on a laptop, you don’t get to play with faders and wheels. This becomes a pain when trying to program more complex lighting rigs. ChamSys make the MagicQ PC Wing, which has all the major buttons and encoders plus the playback faders and go buttons. The PC wing also has two DMX universe outputs, giving you plenty of control capacity for shows. Using the MagicQ PC wing and a tablet laptop or touchscreens is near as you can get to owning a really high quality, professional lighting console without spending tens of thousands.

Cham Sys now produce all manner of fader wings, cut down consoles and add ons – all using the same platform. Something for everyone, you might say.

The MagicQ lighting control range is gaining industry popularity. It takes time for new manufacturers to become really established in a market but Cham Sys have a good product. They also have the right attitude towards their users and with growing market penetration, could become an “industry standard” brand. It also seems like their presence has forced a few other lighting console makers to up their game.

If you have used the ChamSys MagicQ software and have any thoughts, let us know in the Comments section. If you would like On Stage Lighting to feature MagicQ tutorials in the future, get in touch.

On Stage Lighting has created a series of tutorials to help you find your feet on the Cham Sys MagicQ PC software, as well as learn more about about show lighting control in general: