In the first of our long awaited series of tutorials, On Stage Lighting has a beginner’s guide to the MagicQ PC. A sightseeing tour rather than a how-to, this article looks at the interface and concepts of the Cham Sys lighting desk.

New: A pdf version of this guide is available for you to download and print – MagicQ Introduction PDF 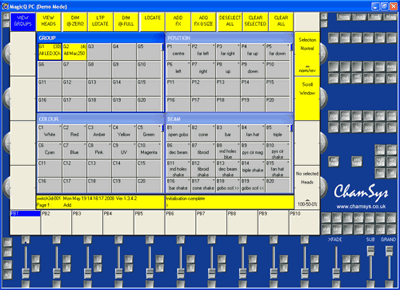 A note about the MagicQ:

On Stage Lighting often recommends the use of the Cham Sys MagicQ PC to people looking for a cheap PC DMX lighting controller and apprentice programmers interested in moving light control training. Although I do have a passing connection with Cham Sys, my enthusiasm comes from the fact that I think that the MagicQ is a good lighting desk. The MagicQ PC software is also freely available, cheap to cheap to use with a DMX USB device and is a good desk to learn. Disclaimer over.

Although the user interface (UI) on PC can seem a bit at odds with genuine PC based lighting control, it’s a real lighting console that shares many concepts and workflows with other consoles. The Grand MA and Whole Hog III desks are, at the time of writing, popular moving light consoles. Learning the MagicQ is time well spent when want to learn these other desks.

Get The MagicQ PC Software

The PC version software is available from the Cham Sys website for PC , Mac and Linux.
You have to enter an email to get a download link but Cham Sys don’t send you endless newsletters or sell your email address to spammers.

To look around the different areas of the MagicQ PC sofware it’s a good idea to load up one of the demo shows available with the download. This gives you instant “stuff to look at” without having to patch up, record looks etc. If you don’t already have a demo show running, you can hit the SETUP button followed by the Load Show softkey at the top of the screen. Confirm the overwrite and select demo.shw Once the show has loaded, you can close the Setup window using the CLOSE hardbutton or get a different view by holding your PC Ctrl key and selecting a view button, such as Palettes, in the top right hand corner of the main screen.

Let’s start with the playback side of the MagicQ, a pretty important part of any lighting console. Most large consoles provide a range of playback options to suit different shows and the MagicQ PC is no exception.

So, the faders can trigger moving lights, fade intensities or can be set to control speeds of chases and effects. The range of playback options available mean that you can choose how you record and play your show whether it’s a theatre play, a club or a concert. When first learning moving light control on MagicQ PC, it is good start with a simple system such as recording each look onto a playback fader or running a single cue stack.

The MagicQ uses a programmer based recording system. Values are entered into the programmer, over-riding current output values, and are dumped into their destination playback. The contents of the Programmer are wiped using the CLR button (hiding down on the right in the standard PC view) and a new look is built. For more information see our article on using programmer based controllers.

The MagicQ desk uses a colour touchscreen with additional hardware buttons, patched to contextual softbutton control. The MagicQ PC screen replicates the touchscreen minus the hard buttons round the screen area. The large yellow squares around the edge provide softbuttons that change as you enter different screens. The screen layouts are customisable and provide the flexible interface for the console.

The hardware buttons on the MagicQ are grouped according to function. Here’s a quick tour around the button groups, starting at the top right. 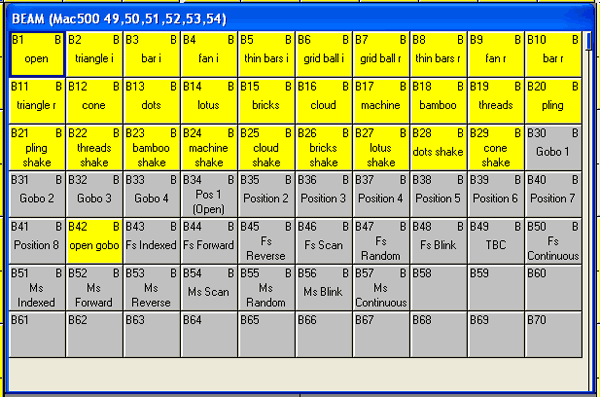 The MagicQ often displays selection grids on it’s main screen. These squares are softbuttons that hold the button label and can be used for selection. The grids display Fixtures, Groups, Palettes and other selectable stuff. Using MagicQ PC without a touchscreen, the mouse is used to click on the square.

Using spreadsheet style layouts to display information, the MagicQ also allows you to change data via the spreadsheet. Selecting mulitple fields and entering new values can help with patching, cue editing etc. and provides another powerful way of getting around.

Changing values and labelling is an important part of console housekeeping. On MagicQ PC, these can be entered using the PC keyboard but a “virtual” QWERTY or numeric keypad will pop up for text entry. It’s worth knowing that some labelling jobs can be done quickly “on the fly” while storing Groups, Palettes and Memories. It’s also possible to adjust labels but pressing the SET hardbutton and selecting the window item to be changed.

While we are talking about the PC keyboard, there are different options to use keyboard shortcuts when using the MagicQ PC. There’s a tutorial coming up dedicated to these shortcuts. 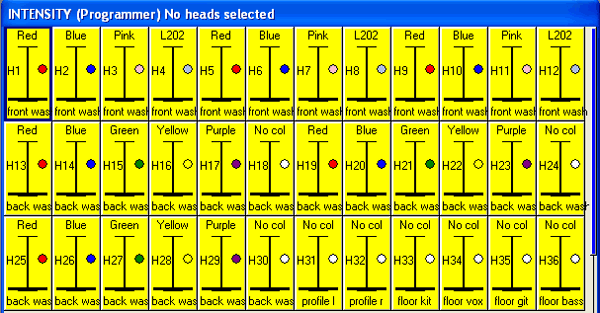 The MagicQ has many similar windows that allow selection and adjustment. The exception, in looks at least, is the Intensity Window. Accessed using the INT hardbutton, the Intensity Window provides dimmer control of all patched fixtures and dimmers using virtual faders. On the PC you can use the mouse to select dimmer/fixture channels or fade them up and down using the sliders. With the Demo show loaded, you will notice that the intensity faders are also named and coloured up according to their gels – neat, huh?

Back on the Bus please,

So, we’ve had a nose around the main interface of the MagicQ PC. While you have got the demo show loaded up, it’s worth looking around the different screens and options and press a few buttons (let’s face it – this is how most of us learn new software, anyway) . Given a bit of a kick start from our tour, it should be fairly easy to find your way around . The next stage is learning how to use all these windows and softbuttons to create and run your show. Luckily, On Stage Lighting will be producing a whole series of tutorials on using the MagicQ with both the basics and more complex features. Don’t forget to make sure your receive our updates via RSS feed or email.

Take a look at the rest of our MagicQ and other tutorials here.

See you next time.