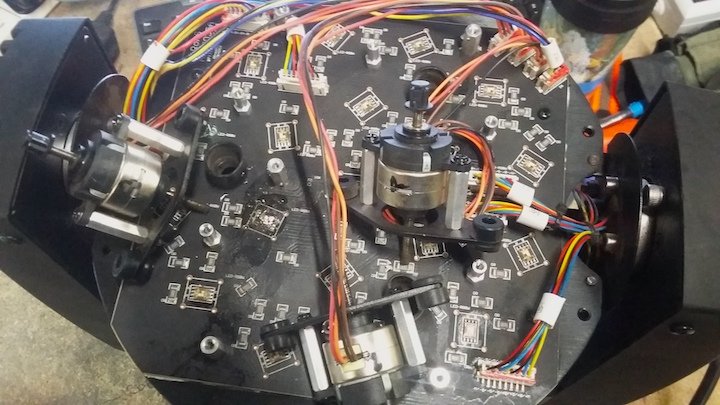 In the first of a mini-series of articles, On Stage Lighting looks at what it takes to keep a modern LED stage lighting rig working and the particular issues surrounding these ‘eco-friendly’ light sources.

In the early days of OSL, we looked at LEDs and their limitations as a stage lighting source in what was a new development back then.  Ten years later, we revised and acknowledged the some of the improvements towards LEDs as a main source of light for a wide range of fixtures and applications.

Fast forward to today: LEDs are everywhere in performance lighting, for all users and all levels of budget.  Now the industry as had access to workhorse LED fixtures for long enough to start to understand what it takes to keep them working.

I’m going to skip over discussing the merits or otherwise or LEDs from a Lighting Designer point of view.  We also won’t go into to much depth regarding the supposed ‘savings’, either in terms of energy or cash – this is somewhat up for debate.  Suffice to say, LED stage lighting fixtures need looking after and can fail and this is what we will be looking at in the series.

For anyone working on the upkeep of moving lights from the past, they will recall common issues with these little robotic lights that could be remotely controlled.  Common areas of interest for the repair technician were often in the area of mechanical parts, the discharge lamp circuits, or that of the internals that included stepper motors, motor drivers, sensors and associated circuitry – along with the all important ‘main board’ and firmware. Service and repair of older style moving lights is often focused on the mechanical elements such as belts, drives and optics along with cooling systems.

There are some parallels here with LED systems, but some areas of concern are more prominent than others with the kit of 2019.

So what’s different in 2019 with LED stage lighting technology?

If you take a fairly standard moving head wash light, it will contain much of the same parts as a ‘traditional’ fixture.  It will still have a main board (motherboard, ‘mobo’, etc), still have some motors and sensors plus some kind of user interface.  While the user interfaces are sometimes a little more snazzy, from a maintenance and repair point of view they are pretty much the same.

Spending time with LED kit that has been on the road for a while now, it seems that we spend a lot less time on belts, motors, and their drivers and more time with the ‘new’ bits of the technology.  In the case of a LED moving head this is basically the driver circuits and the LEDs themselves.

The other thing we spend more time with is the power supplies.

Modern stage lighting fixtures in 2019 are no different to those back in 1999 – they need a working power supply.  Not only does this power the light source and the moving parts, but also the processors that control everything.  One bit of a power supply breaks, no working fixture.    This isn’t a new problem, but in my experience the power supply is becoming a more common failure point in modern fixtures particularly those built down to the lower price points.

The developments in moving light product design has continue to move toward efficient and lightweight power supplies.  Like everything else in the world of electrical technology, this means a switching power supplies (Switch Mode Power Supply or SMPS).  These power supplies provide a range of usable stable voltages for everything from the lamp right down to powering individual microprocessors.  SMPS are a marvel of electrical engineering and are robust and potentially long lasting.  However, a lot of the magic behind these power supplies can put their different parts working near their limits and they can break down.

Power supply components fail and everything on the fixture stops working

It’s likely that fixing a SMPS isn’t just going to be as simple as changing a fuse.

Like SMPS, the bit and pieces that make the high brightness LEDs in a moving wash light fade up and down are a marvel of technology.  Consisting of just a few components and a microprocessor to the naked eye, the driver circuit is actually doing quite challenging work in order to run those LEDs how we want them to.  As users, we have asked manufacturers for affordable, and bright light sources, and with high quality dimming.  In order to achieve this, components in the driver circuits are working hard and this means they can just fall over.  LED driver circuits are a common point of failure in modern lighting and one that is regularly addressed by the repair tech.

Finally, we come to the LEDs themselves.  Often a chip with multiple LEDs of different colours in them, these are not the little red or green dome shape that we use to think of when the word ‘LED’ was mentioned.  LEDs have many benefits as a light source and, when driven well, they can achieve some pretty great things for Lighting Designers.  However, there are two key issues with LEDs.

There is no doubt that LEDs are bright, efficient and long lasting – if they don’t get fried.  When they do get fried, it’s often a single colour in the LED chip that has gone AWOL (such as Red, Green, Blue, White etc) and the whole chip needs replacing.  This is often NOT an easy thing to swap out.

For fixtures that share a lot of optical and mechanical similarities with an older style moving spot or wash, there are still similar jobs in the service list.  Stuff like checking and maintaining moving parts, cleaning optics and the like. There is also similar emphasis on cooling.  Even while LEDs may not crank up to the temperatures in a discharge light source, cooling of the LEDs and the driver and power supply components still are important.

The other common issue with any fixture, regardless of type, is dirt.  Crud and particulates from haze fluid get sucked into the fixture (or control desk, in fact) and sit around gunking stuff up.  In modern fixtures, particularly LED units, this is increasingly reason for failure when the gunk builds up on PCBs that are open to the cooling flow of air and starts to cause problems with the tiny components, microprocessors and tracks. These can cause leakages, shorts and future nasties that mean that properly cleaning PCBs can be an important service task on certain designs of LED fixture.

OK, so you diligently maintained your LED kit, but you have a busted moving wash light.  What options are there?

You could just chuck the unit.  In the case of cheap imported LED fixtures, people do actually write off whole fixtures and use them for spares.  The only issue with any kind of ‘donor’ system in any repair field is that the same issues arise over and over and the donor can only provide a single-shot fix for the problem.  Writing off fixtures is part of buying cheap kit, knowing there is little point trying to fix it in many fault cases.

You can source and fit manufacturer parts.  This includes whole power supplies, LED driver PCBs, LED chip boards etc.  The issue with whole assemblies is that you are often swapping out a lot of good stuff in order to fix a problem with one bad component – and these whole parts may not be cheap.  Many people use this method of keeping their kit going while parts remain available.

You can identify faults at component level and replace, either with new or ones from a donor fixture.  This is cheap on parts but can be expensive on technician time.  It also requires a level of knowledge, and tools and facility to do this kind of repair plus there is a risk that you identify a fried component only to find that the failure took out a whole bunch of other things too.  This kind of fix is for more skilled techs and is often the only option for fixtures that parts are no longer available for.

Conclusion. And coming up…!

We are now at a point in the development of LED stage lighting technology where fixture repair is becoming a key topic for equipment owners at every level, from a school with some moving LED wash lights, right up to large rental houses with the most expensive and complex gear.

In the next article in this series, we are going to look at a fairly common LED moving wash light and use it as a template for the kind of things that need to be consider in keeping our LED based rig working with both repair and service.

Have you had experiences of having to maintain and fix broken LED fixtures?  How you find the transition over to LED now we have had time to break-in the kit?  Get in touch via the comments below.

4 thoughts on “LED Moving Lights Service and Repair – What keeps a rig working in 2019?”

A small side project, promoting re-use and repair of electrical and electronic items.